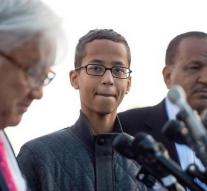 - The family of the student who almost a year ago was arrested in Irving in the US state of Texas, because he had made a clock that was mistaken for a bomb, has sued his former school. The director of the school and the school district have to answer according to the family, as US media reported.

Fourteen-year-old Ahmed Mohamed appeared last year with his own creation with wires on the MacArthur High School. An employee of the school immediately thought of a bomb and called the police. On the desk appeared to be a clock. The adolescent was anyway suspended by his school.

According to the indictment have been violated the civil rights of the boy and there is discrimination, Mohamed is Muslim. Last year, the family demanded a compensation of $ 15 million from the school and church.


The boy left shortly after the incident with his family to Qatar, which offered him a scholarship for an education for young inventors.