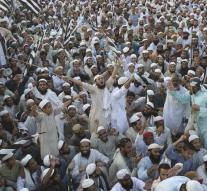 islamabad - The family of the liberated Christian Pakistani Asia Bibi is threatened and chased by Muslim extremists.

Bibi was previously acquitted of blasphemy, but radical Muslims in the country do not accept that. After her release, emotions are running high. For example, her family has been 'continuously threatened and hunted' since her release, 'says Kerk in Nood.