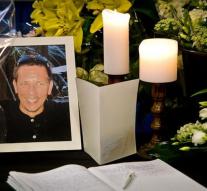 almere - According to Yehudi Moszkowicz, Richard Nieuwenhuizen's family is still waiting for more than 20,000 euros of the benefit contest in honor of the deceased border judge. This said the lawyer on behalf of the family against RTL Boulevard. It now claims the remaining amount of SC Buitenboys.

The Almererder was abducted by SC Buitenboys at the end of 2012 during an amateur game against Nieuw Sloten and later died of his injuries. A father and a few players from a visiting club were sentenced for slaughter and / or overt violence.

After his death, a benefit match was organized on SC Buitenboys's field and collected about 55,000 euros. This money would go to the survivors, but not all the money has been paid according to Moszkowicz. There would be another part (20,000 euros) when the two sons of Nieuwenhuizen would leave the house, Omroep Flevoland knows. Since the two have done so now, the money should be transferred. But that money is not there, it's up.

Richard Nieuwenhuizen Foundation would manage the money according to Buitenboys chairman Richard Langeveld, but the administration is a big mess. On Facebook, the club announces that financial statements have indeed been made by the ex-chairman, but they have not been written in writing.

'We are responsible for the current finances as directors and can not even pay a large amount of money under media threats. It is about money from our current members. We will keep you informed of actual developments and will not pay for payment without the agreement and agreement of our members. ', The club writes on their Facebook page.

That's why SC Buitenboys wants to talk to the family, but it would have been negative to respond to a call for up to three times.