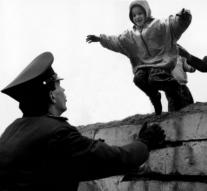 - The power of freedom led to the fall of the Berlin Wall and German unity regained. Angela Merkel were the happiest moments,, of German and European history. ' This said the chancellor Thursday in Middelburg at the presentation of the medal that belongs to the Four Freedoms Award.

Merkel stopped by the Second World War which led to the division of Germany.,, Middelburg was then almost completely destroyed, '' says the Christian Democrat. For her unforgotten,, '' how the US has conquered the Hitler dictatorship and,, have paved the way to freedom and peace. '

She is thankful that Germany once again has a permanent place in Europe and praised the way Middelburg rebuilt.,, Change for the better is always possible, '' said Merkel. Addressed to Queen Máxima, Merkel pointed to the great impression she made during her visits to Germany.

,, The vision of Roosevelt must not remain theory, '' said the politician. Freedom is always fragile and therefore passes into the responsibility for her. The attacks of Paris and Brussels affect us all. The rule of law must establish itself resilient, without affecting the central freedoms.

Merkel ended her speech in Dutch with the words,, Thanks a lot '!

Merkel has been awarded the International Four Freedoms Award for its moral leadership, not only in Germany but also as a pioneer in the European refugee crisis and financial crisis.