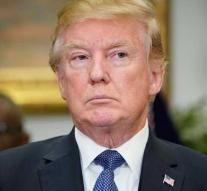 oslo - The Norwegian Nobel Peace Peace Committee believes that a nomination submitted in favor of US President Donald Trump is false. The committee has handed over the case to the police, BBC reports Wednesday.

An anonymous American commissioned Trump for his 'ideology of enforced peace. '' We have good reason to believe that it is fake ', says the committee's boss.

Nominations must be submitted before 31 January each year. This can only be done by certain people, such as parliamentary and government members, former winners and a few professors.