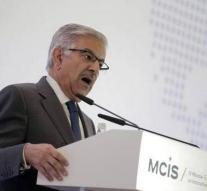 islamabad - Pakistani Defence Minister Khawaja Asif has threatened Israel with a nuclear attack after he was kicked on the Internet in a nepnieuwsbericht. The former Israeli Defense Minister Moshe Yaalon was quoted in it as saying that Israel Pakistan 'Nuclear will destroy. '

Israel stressed in the Christmas weekend that the message that Asif himself was based on 'completely false'. The Pakistani government found it Monday no need to respond further. But in a response to an article in the New York Times about the issue Asif said that the nuclear weapons program of his country 'only a deterrent to protect our freedom. We want to peacefully coexist in our region and beyond. '