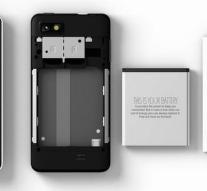 amsterdam - Fairphone has stopped supporting the first device that launched the Dutch company at the end of 2013. The company no longer sells spare parts for the Fairphone 1 and has stopped software updates for the Android operating system.

'' Personally and professionally, it was a bitter sweet decision '', founder Bas of Abel writes in a blog on Wednesday. 'The Fairphone 1 was our baby, the very first product we have marketed worldwide. We wanted to make it as long as possible for ourselves and for the pioneers who bought this phone and supported us financially at the start of our business. '

'But after almost 3.5 years, it's reached the point that it's no longer possible to support our first phone. Over time, the possibilities for continuing to support the Fairphone 1 have steadily decreased. We can spend the money better for The future of our company. 'The spare parts have not been made anymore, such as batteries. The company could no longer afford to continue to order old batteries.

The Fairphone 1 was launched in 2013. The Dutch company Fairphone tries to process as many products as possible into the smartphones it makes.