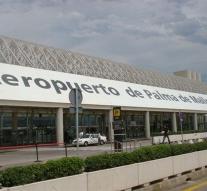 palma de mallorca - A technical failure in the Palma de Mallorca airport Wednesday traffic partially paralyzed. Airplanes can not leave until the problem is solved, according to the aviation authorities. They did not say what exactly is wrong. According to Spanish media, something would be wrong with the radars. Aircraft may still be countries.

In Spain the week before Easter vacation time and one of the busiest weeks of the year. People who want to fly or who want to leave it to Palma, are advised to contact their airline.