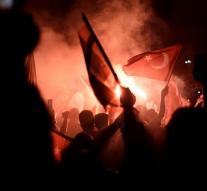 - After the failed coup in Turkey, the government of President Recep Tayyip Erdogan drew the first consequences. On the streets and squares, apart from the display of flags by Erdogan's supporters, but the rest returned to the political scene not long.

What are the facts:

- Parts of the Turkish armed forces declare Friday to have the power acquired in Turkey. They occupy strategic places and set a curfew.


- The majority of the population and the opposition denounce a coup. The police and a large part of the army remain faithful to the government.

- In Ankara and Istanbul is the war scenes. There are at least 265 people dead, including 104 putschists. There are more than a thousand wounded.

- Erdogan calls the attempt to overthrow him,, a blessing from God '' and announces,, cleansing 'on. arrested nearly 3,000 soldiers; more than 2,700 judges and prosecutors be put out of their office and arrested. Justice Minister Bekir Bozdag said to expect that 6000 certainly involved will be indicted.


- Erdogan called Islamic cleric Fethullah Gulen who lives in exile in the US, the brains behind the coup and demanded extradition. Gulen, a former companion of Erdogan denies any involvement.

- The USA take the accusation Erdogan for informing. Minister John Kerry says that Americans are willing to cooperate with the investigation. Turkey is invited to come forward with evidence.

What are the questions

- Who puts out? violence does not fit with the Gülen movement, the prominent Turkish journalist Ezgi Basaran. The statement read on television before and the presentation of the putchisten more reminiscent of supporters of Mustafa Kemal Atatürk, the founder of the modern secular Turkish republic. On the other hand it can also be a deliberately plotted astray.

- Is everything put in scene? This conspiracy theory proposes among others Gülen. Indeed, there are inconsistencies and Erdogan undoubtedly grasps the coup for political gain. However, the government made the night of the coup an uncertain impression and it is unclear what interest would the military staged a coup. Possibly the coup plotters acted hastily because their plans were leaked.

- How to proceed? Erdogan's opponents fear that he uses the coup to further restrict civil liberties and press freedom. The mass resignation within the judiciary is cause for concern, the call for the reintroduction of the death penalty. That decision can Turkey join the EU forgotten.

- What are the consequences for tourism? This becomes clear in the coming weeks. It is just flown in Antalya and Izmir. Vacationers in those parts have relatively little to fear. The attack on the Istanbul airport has the industry done a lot of harm.