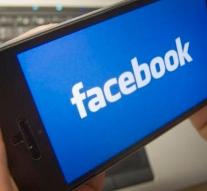 london - Facebook has warned British users in newspaper ads for fake news. The internet company came under the headline 'Tips to Review Fake News' with ten ways to determine if a news item is reliable.

Facebook placed the advertisement in the run-up to the British elections in June. Users of the social networking site, among other things, do not just share the advice of striking news, but first look at other sources to see if the story is correct.

The internet company not only focuses on better information, but also tackles distributors of fake news. 'We have developed new ways to identify and remove fake accounts that may distribute fake news,' said Simon Milner of the British branch of Facebook.

Facebook previously removed tens of thousands of fake accounts in the run-up to the first round of the French presidential election. The company also turned on fact checkers to check the authenticity of shared stories.