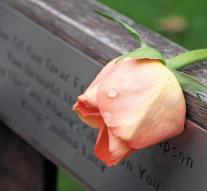 Many users see a message on their profile which states: 'We hope that people find comfort in celebrating the sharing of memories and his life. ' Not all profiles are affected by the remarkable status of tribute. Founder Mark Zuckerberg escaped however not. He was also wrongly declared dead by his own social networking site.

It is unclear what caused the massive death notices. Probably it is a bug in the system of Facebook.