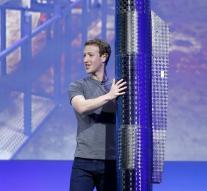 - Facebook on Thursday made a test with an unmanned aircraft powered by solar energy. The device is called the Aquila. It should provide poor people access to the Internet in remote areas, as a sort of flying router.

Facebook calls the first test flight full-scale success. The unit was more than one and a half hours in the air, three times as long as planned. In upcoming tests the solar airplane must faster, higher and fly longer.

If the Aquila finally really going to work, he must fly at an altitude of over 18 kilometers. From that height, the device can connect everyone in an area of ​​about 100 kilometers in diameter on the Internet. He has to three months, to be able to continue in one piece in the air.