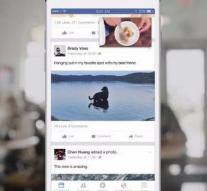 - A manager of Facebook wants his people to use Android phones instead of iPhones for the application of the social network. Therefore, the developers can better empathize with Facebook users in emerging markets, where many more Android phones than iPhones are in use.

This was reported by Wired. Chief product officer Chris Cox, Facebook has nothing against Apple. Yet the people have to change, so Cox told the press during a meeting. " If it is up to the people themselves, they prefer to use an iPhone. But my whole team must now make the switch. So they can report bugs and have the same user experience as the most Facebook users themselves. "

In western countries, the iPhone has a substantial market share. But in emerging markets such as India Android is the main operating system. Cox want to put a better product on its new course.