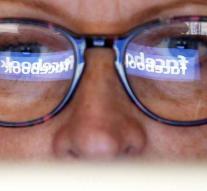 - Facebook has given access to data from its users around sixty companies, including phone makers such as Apple and Samsung, including their religious beliefs, relationship status and friends' data. That writes the New York Times.

Facebook has admitted sharing the data, but states that there has been no abuse of the data and states that the agreements it made with hardware makers were necessary to keep up with the growth of the network.

The makers of smartphones and tablets would have been allowed to consult the data, in a period that the use of Facebook grew so fast that the company itself was not able to launch all Facebook apps. Due to the development of the popular Facebook applications, the network itself could grow faster than they could have done on their own.

The scandal is reminiscent of the large privacy site around Cambridge Analytica, which revealed earlier this year that data from more than 80 million Facebook users had been illegally resold and used in political campaigns. Data from friends of users had also been captured there, whereas they had never given permission for this.

As a result of the Cambridge scandal, Facebook has announced that it has already prohibited developers of apps from sharing unsolicited data in 2014, but did not mention that the makers of hardware had an exceptional position. Some of these deals would have been canceled, others would still be running.

In a response to the latest unveiling of the New York Times, Facebook states that 'no cases of abuse are known' by the hardware makers who had access to user data under these conditions. According to the network, the two privacy leaks could not be compared, because the hardware makers could only use the data 'to improve the Facebook experience'. The unsolicited sharing of data with 'service providers' that enrich the 'Facebook experience' would not be against the rules according to Facebook. The passing of data to regular apps and games is something very different according to the company.

But security experts in the New York Times report that in some way the infringement went even further than at Cambridge, as they would also have had access to data from friends of users who had indicated that they did not want any data at all.

Facebook now has more than one billion users. The network has been able to grow so quickly, by fully focusing on expanding the network. In addition, the network has afterwards, according to CEO Mark Zuckerberg repeatedly in the last few months, given too little attention to protecting the privacy of his users.