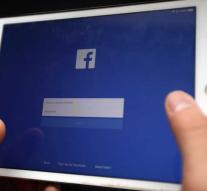 menlo park - Facebook has removed 364 pages from the platform. According to the company, these would show 'unreliable behavior' on Facebook and Instagram. It concerns two operations from Russia.

According to the social media platform, there are fake accounts that have been created to mislead others. There is also a lie about who they are and what they do. Facebook says to see no connection between the two operations, but the same tactics are used. In one, mainly countries in Eastern Europe were affected, the other specifically affected Ukraine. Also, networks have been created that are linked to different accounts.