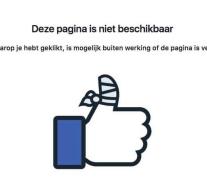 menlo park - About twenty important people and organizations in Myanmar can not be on Facebook for the time being. Their accounts were removed on Monday because they spread 'hatred and misinformation'.

These include Min Aung Hlaing, commander-in-chief of the Myanmar Army. According to a UN report, he should be prosecuted for massacres against the Rohingya minority.

The television channel of the armed forces, Myawady, is no longer welcome on Facebook. 'We want to prevent them from using our services to stir up ethnic and religious tensions,' writes Facebook.

Facebook removes eighteen profiles and more than fifty pages. An account on subsidiary Instagram has also been deleted. The accounts together have about twelve million followers.

In addition, 12 accounts and 46 pages were removed due to 'false behavior'. They would have coordinated the message of the Myanmar army.