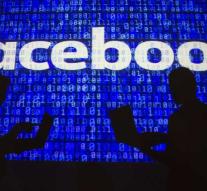 menlo park - Facebook has removed a quiz from the network because it may have misused the data of about four million users. This is my Personality, which was mainly active for 2012. Users could answer questions about their personality. That was combined with personal information, after which people got a kind of psychological profile of themselves.

Facebook says it wanted to investigate myPersonality, but the people behind the app did not want to cooperate. 'It was also clear that they shared information with researchers and companies, with limited protections,' says Facebook.

The platform has been researching thousands of apps in recent months. More than four hundred of these were suspended because of possible abuse of data.

myPersonality was created in 2007 by a researcher from the University of Cambridge. It is not known whether there is a connection with the large privacy scandal surrounding Cambridge Analytica. That company, which is also affiliated with the prestigious university, received the personal information from 87 million Facebook users. These data would have been used for targeted advertisements in the run-up to the US presidential elections and the British Brexit referendum.