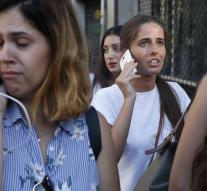 barcelona - Facebook has opened its security sketch so that people in Barcelona can tell their home front that they're okay.

The page is called The attack in Barcelona Spain. Users can also send messages to their friends to ask if they are safe.

Facebook introduced the page in 2011 and was used mainly during natural disasters. But also in the Paris attacks of 2015, the site proved its worth. The site was also used in the attacks in London, Nice, Berlin and the big fire in London.

The Dutch Red Cross is considering opening its special site on which people can tell their family home that they are alright. The website is safe. Red Cross. Nl has been used before in major attacks.