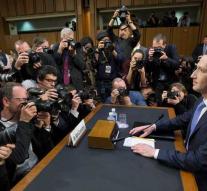 - Does Facebook CEO Mark Zuckerberg dare to commit more concretely in Brussels to stricter privacy protection for his users than he did in the US Congress? According to privacy experts, this question is crucial if Zuckerberg does not want to run into new investigations by European supervisors.

Zuckerberg gives live explanation in the European Parliament on Tuesday evening between 6:15 and 7:30 PM. He is expected to apologize again.

He stands in front of group leaders and the rapporteur of the Committee on Civil Liberties. In the European Parliament, he firstly answered how it was possible that data from 87 million users could get into the hands of companies without their consent.

Among other data processor Cambridge Analytica used Faceboook data and profiles about political preference, personal data and relations with others for the American election campaign of the Republicans.

According to the earlier interrogation, Facebook did not show up until late. Since then, that possibility has been blocked. Users must give permission in advance.