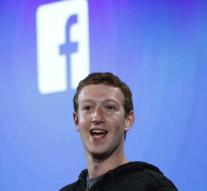 - Facebook is investigating whether it can enter subscriptions. Users would then pay for the network and in exchange not see ads. The reason is the controversy about private data abuse of tens of millions of users by Cambridge Analytica. Those users would then have been bombarded with political advertisements to influence them.

Facebook had previously done research into a paid version and that did not matter at all, but now the initiative would be revived.

Initiates discussed the plans with the Bloomberg news agency. Topman and founder Mark Zuckerberg and his colleague Sheryl Sandberg, who has the daily management as operational director, have so far left the door to a paid Facebook ajar. They said that ads ensure that everyone can access Facebook regardless of income, but does not explicitly exclude subscriptions.