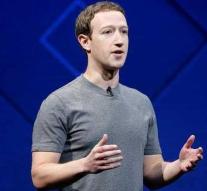 menlo park - Facebook is taking steps to better protect data on its platform against abuse. The company reported this in a statement. Topman Mark Zuckerberg put on the fines and said that he is responsible for everything that has happened.

Facebook came under attack by a scandal around Cambridge Analytica. That company played a role in President Donald Trump's election campaign and would have used personal information from tens of millions of Facebook users to create voter profiles.