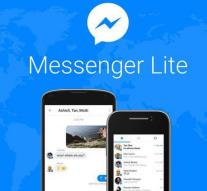 - Facebook brings a lite version of its Messenger app from. The chat app is thus more accessible for people with old Android devices with less storage, memory and performance. That David Marcus, who is responsible for Facebook Messenger published Monday.

The app is available now and Monday will be released first in Kenya, Malaysia, Sri Lanka, Tunisia and Venezuela. At a later stage to follow more countries.