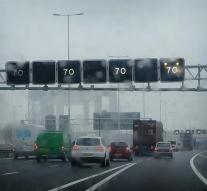 amsterdam - The evening rush hour is particularly in the west and center of the country exceptionally busy. There are approximately three times as many traffic jams solid as usual.

Especially on the roads around the capital runs the firm ugly. On the highways A8, A9 and A10 ring road is all but walking pace. There are four files with a total length of 44 kilometers. A technical failure in the Zeeburg Tunnel is partly to blame for the crowds.

Also around Utrecht and Rotterdam are long queues.


It remains still as wet tonight. From the drier tomorrow.

According to the AA state stood around 18. 00 hours no less than 537 kilometers of traffic jam. Since Monday is the second busiest rush hour of the year so far.