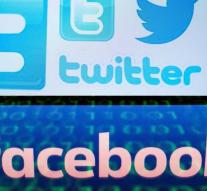 brussels - The European Commission comes with new laws that oblige Google, Facebook, Twitter and others Internet companies to remove extremist content within an hour. Otherwise companies can face a fine.

The committee had informed the companies in March that they had three months to show that they could remove extremist messages more quickly. Otherwise, there would be new legislation.

In the bill that still needs to be supported by the EU countries and by the European Parliament, internet platforms are obliged to take proactive measures, such as the development of search engines to signal abuse early. Carers also have to give an annual openness about their efforts to combat abuse.