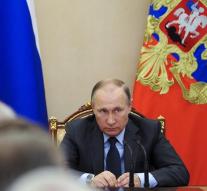 brussels - European sanctions against Russia about 150 people and 37 companies and organizations will be extended by six months. The ambassadors of the EU Member States were to match Wednesday, according to diplomatic sources.

Blacklisted Russians are held partly responsible for the conflict in Ukraine, including oligarchs and politicians from the entourage around President Vladimir Putin. Their financial assets in the EU will remain frozen and they are not allowed to travel to EU countries.

The punitive measures would expire on September 15, but given the lack of compliance with the Minsk peace agreement, Member States no reason to be easing. The formal adoption is expected to follow in a few days.


The economic sanctions taken by the EU against Russia after the Russian annexation of the Ukrainian Crimea in 2014 have already been extended by six months in June.