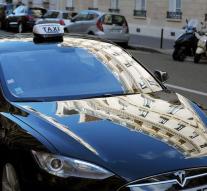 - Police in Paris have arrested a 22-year-old taxi driver after it was found explosive materials in his home. The man was radicalized as known to the authorities.

The man's car was searched last Sunday night after he had committed a traffic offense. In his car, police found papers and identity cards that were previously captured in a burglary. Then the police also decided to search his house.

The house layers according to Europe 1 detonators and two sticks of dynamite. On his phone was found an image of the IS-flag.