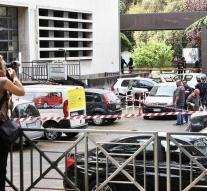 rome - In the center of Rome a car was damaged by an explosion on Friday. Nobody got injured. During a search, the police found two improvised bombs between parked cars, reported the Italian public broadcaster RAI.

The blast occurred at a post office near the Circus Maximus. The authorities could not say much about the background. An action by anarchists is not ruled out, according to ANSA press office.