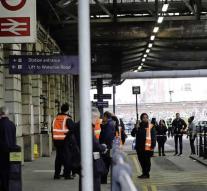 london - In the British capital London, improvised explosives have been found in three places. No one was injured, police say.

The explosives were in sent packages. These have been discovered in buildings at the airports Heathrow and London City Airport and in a mailroom at the Waterloo train station. According to the first research results, the packets seem to cause only a small fire when they are opened.