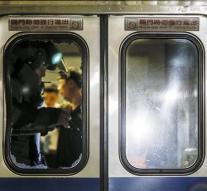 - By three explosions at a train in the center of Taiwan's capital Taipei are least 21 people injured. According to a television channel said the explosion in the evening rather than in a carriage that was filled with commuters.

Focus Taiwan TV reported further that arose after the explosions fire. Ambulances and fire engines were quickly on the spot.

The cause is still unknown, but a local newspaper reported that witnesses a man, forties, had seen action in the carriage who set a cylindrical object and then quickly stepped back. Police do not yet speak of a terrorist attack.