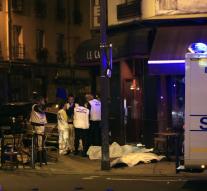 - With several attacks in Paris on Friday, at least 120 deaths. The police have seven different places shootings and explosions occurred, including at the Louvre and at the football stadium Stade de France in Saint-Denis suburb. The police speaks of two suicide attacks and eight terrorists.

Terror in Paris: more than 120 dead in co-ordinated attacks

About the number of people wounded by the terrorist attacks in Paris, is still uncertainty. The authorities have provided no official figures. The French newspaper Le Figaro Saturday morning about two hundred wounded.

President Hollande has declared a state of emergency throughout France. The borders are closed. The French police Parisians advises to stay indoors unless they really have to go outside. Metro lines 3, 5, 8, 9 and 11 are silent. All French schools are closed Saturday.

According jusititie eight terrorists were killed in France, seven of whom themselves at various locations with explosives blew up. The eighth was shot dead by police.

A few hours after the attack Hollande spoke to the nation from the crisis center at the Ministry of Interior. "These are terrorist attacks such as we have never seen," the politician compared the attack with the horrors of the editors of Charlie Hebdo and in a Jewish supermarket in January. "All possible means are used to eliminate the terrorists and protect the French."

There are another 1,500 soldiers mobilized in the fight against terrorism. This has the Elysee Palace reported Saturday. Friday nights were already 200 soldiers sent on the road.

A fire chief reported on iTele: France is at war. ''

We have fled. When we left, we stepped over the bodies away. You understand, it was a nightmare. "" This is an eyewitness, one Louis, that Friday night with his mother managed to get away from the Bataclan concert hall, said on news channel France Info.
Les Halles

Around 23:45 pm, there was a shooting at Les Halles shopping center. About deaths or injuries is not yet clear.

Earlier in the evening the news came in about a man who walked into a restaurant with a Kalashnikov and shot around. The restaurant is near the rue Bichat in the tenth district. The shots were heard near the metro station Goncourt. The police put a large cordon around the place, closed streets and asked all residents to take cover in buildings.

Around the same time at the Stade de France was in the northern suburb of Saint-Denis target of a suicide attack with grenades. And wounded three deaths.

Spectators of the friendly match between France and Germany, including President Hollande, heard three massive blows to the square around the football temple. The head of state was evacuated and transferred to a crisis center at the Ministry of Interior. The spectators at the exhibition game Friday between France and Germany in Paris after the final whistle incurred the field. The attendees were evacuated.

There is a book of condolence created on the Dutch website condoleance.nl for the victims and their families.