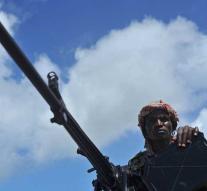 mogadishu - In the Somali capital Mogadishu, an explosion and gunshots could be heard on Saturday in the vicinity of the presidential palace. That is what witnesses and the police report. The police shot on a speeding car that exploded near the palace.

Who is behind the explosion and what the reason for the violence is, is not yet clear. The Islamic terrorist movement al-Shabaab had previously carried out similar attacks in the country several times.

Somalia has been in the grip of a bloody conflict between the government and al-Shabaab since the fall of dictator Mohamed Siad Barre in the early nineties. The group regularly executes attacks in the East African country in an attempt to overthrow the West-backed government and establish an Islamic state.