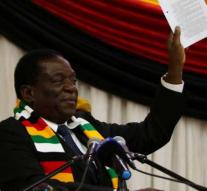 bulawayo - In a stadium where Zimbabwean president Emmerson Mnangagwa held a campaign meeting on Saturday, an explosion has occurred. A spokesman for the president said that Mnangagwa was not injured and brought to safety. The Zimbabwean newspaper The Herald reported that a few other people have been injured.

Among the wounded would be Vice President Kembo Mohadi. That has not been officially confirmed.

Mnangagwa spoke to thousands of people at a stadium in the city of Bulawyo when the blast occurred. The authorities do not know what the cause of the explosion is. According to the president's spokesperson, several attempts have been made in the last five years to kill Mnangagwa.

Mnangagwa became president in November. His predecessor Robert Mugabe had to clear the field after a military coup. Last month, Mnangagwa (75) announced that presidential and parliamentary elections will be held on 30 July.