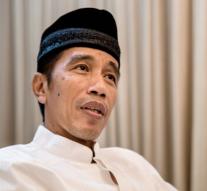 jakarta - A suicide bomber on a motorcycle blew himself Tuesday morning at a police station in the Indonesian city of Solo in Central Java. A policeman was lightly wounded.

Indonesian President Joko Widodo, a former mayor of Solo, urged calm and instructed the police to possible accomplices to detect as soon as possible.

Solo is known as a hotbed of religious fundamentalism. The head of Indonesian intelligence Sutisoyo, told MetroTV that the perpetrator was a supporter of the terrorist group Islamic State. The group claimed its first attack in Indonesia in January. To the action in the capital Jakarta arrived next four perpetrators four people dead.


The Indonesian police in connection with the end of Ramadan tightened the security at churches, mosques, shopping centers and airports.