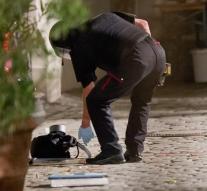 ansbach - Bavarian Interior Minister Joachim Herrmann, assumes that the bombing in the German town of Ansbach was an Islamic terrorist action. That the Minister said Monday.

Sunday blew an 27-year-old Syrian refugee himself at the entrance of a music festival in the old town of Ansbach. In addition, twelve people were injured, three of whom seriously injured.

He wore a backpack containing explosives. According to police, the backpack was filled with sharp metal objects, which indicate according to Herrmann that the culprit was pointed out as much as possible to hurt people. The minister does not rule out Islamic State behind it.


The suspect wanted to come to the festival, but was refused entry because he had no ticket. At the festival, some 2,500 people were present.