Home / World / Explorer starts a journey to the sun 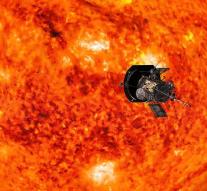 cape canaveral - The lion's den. An American satellite goes there on Saturday. The Parker Solar Probe goes to the sun. He arrives there in November. The solar probe should teach us more about the atmosphere of the sun.

The probe will run oval orbits around the sun for the next seven years. At the closest point, the Parker is only 6 million kilometers away from the sun. Close enough to take a dip in the so-called corona of the sun, but far enough away not to burn. By comparison, Mercury, the first planet in our solar system, is nearly ten times as far away.

No vessel has ever been so close to the sun. The Parker is built to withstand temperatures of 1400 degrees Celsius. The radiation at the destination is about 500 times as fierce as the earth. A special shield must protect the probe against it. Without that shield, the satellite would only survive for a few seconds.

The sun is a great mystery. For example, it is a million degrees in the atmosphere, much warmer than on the surface, where it is no more than 6000 degrees. Nobody knows for sure how that is possible. It may have to do with electromagnetic waves. The only way to find out is to take a look yourself.

The Parker must also carry out research into the so-called solar wind. That is a stream of charged particles that the sun continuously winds up to all planets, including the earth. If these particles know to penetrate to the atmosphere of the earth, they cause the northern lights and the southern light there. But the particles can also be harmful to satellites and communication. The Parker also needs to provide more insight into solar flares and plasma clouds. For example, scientists want to get a better picture of what the earth and the rest of the solar system are actually exposed to.

The launch of the Parker is scheduled for Saturday 9. 33 am Dutch time. During his flight to the sun, the Parker will break a speed record. He reaches a relative speed of 700,000 kilometers per hour. With that, he could fly from Groningen to Utrecht in one second and from Europe to Australia in two minutes.

The Parker is named after the now 91-year-old scientist Eugene N. Parker. The American physicist developed the concept of the solar wind in the 1950s. He was initially declared insane, but when the first satellites entered space and felt the solar wind, it turned out that he was right. It is the first time that a spacecraft has been named after someone who is still alive.