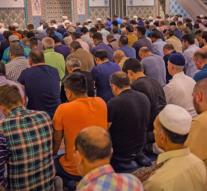 almere - The Prosecution calls 'exploratory research' to the Al-Raza mosque in Almere. This is done according to a spokeswoman after the broadcast of the SBS6 program Undercover in the Netherlands. It was seen that the mosque would participate in illegal religious marriages.

'We look first if there any offenses,' the spokeswoman says in response to a message from Omroep Flevoland. Of persecution is no question yet.

The program was seen Sunday by using a hidden camera did a woman if she wanted to marry a Muslim. She would become his third wife. It is recorded that the chairman of the mosque will contribute to the marriage, even though it clear that there is not married under Dutch law.

According to Islamic custom to marry a man in total with four women. In the Netherlands, only a religious marriage are closed, if there is a civil marriage was celebrated.