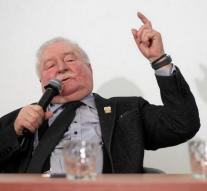 warsaw - Polish experts consider it proven that former president and Nobel laureate Lech Walesa collaborated with the communist secret service. That is the conclusion after analyzing the last year surfaced file 'Bolek' by experts. Andrzej Pozorski, a researcher at the Polish Institute of National Remembrance (IPN), which is Tuesday brought out.

The IPN aims to accurately identify Poland's communist past. By comparing manuscripts revealed that many Bolek documents, including a commitment by the Secret Service, signed by Walesa.