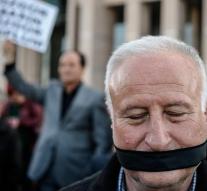 - The massive wave of dismissals in Turkey after the failed coup of July in violation of the Turkish constitution and international law. Which have legal experts from the Council of Europe said Friday.

Thousands of soldiers, police officers, teachers and judges have been dismissed in recent months and put on a siding. According to the Turkish authorities, they are not loyal. Ankara enables supporters of the cleric Fethullah Gulen living in the US responsible for the coup attempt.

The way the state apparatus is purified seems to be very random, according to the Venice Commission, an organ of the intergovernmental organization that the 47 member states of the Council of Europe advice on constitutional issues.