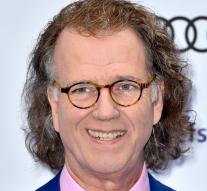 Last weekend, the conductor did during one of his sold-out concerts at the Vrijthof a drone with high-tech equipment over the 12 000-strong crowd circling to shoot movies. As he previously did not have permission, the police confiscated the helikoptertje. 'To ensure safety, it is also irresponsible to have such a device in the inner city to circle above a crowd,' said police spokesman.

Pierre Rieu, son and vice president of the production company of Andre Rieu confirms that the drone was taken away by police immediately after the concert. 'I'm not going to beat around the bush: we've been wrong and that we knew To be very honest to be:. We have deliberately taken the risk Gambled and lost so, all I can do not like it.' He told the newspaper.


Rieu, however, speaks strongly against which there has been a dangerous situation. 'We have deliberately not flown above the audience, but primarily behind the stage and around the plaza.' When the waltz king tech device has not yet been returned to him.