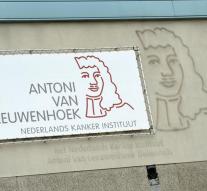 amsterdam - In the Netherlands, new drugs often much more expensive than in other European countries. The differences can reach up to more than 50 percent.

This is evident from an international study led by the Antoni van Leeuwenhoek Hospital in Amsterdam, which Friday will be published in scientific journal The Lancet Oncology.De Volkskrant writes Friday that Minister Edith Schippers of Public Health not want to comment on the investigation. Soon she publishes her medicines vision, in which she will address the affordability and price of medicines, said a spokesman.
NEW