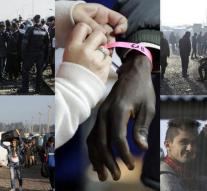 - The enthusiasm is less than yesterday, but the exodus from the jungle in Calais continues. This morning at 11 am 500 migrants had boarded a bus to reception centers throughout France. Yet there remains fear of riots.

This morning there were again long lines at the hangar where migrants can register. From there they are taken to 'guidance centers' where they receive information about an asylum procedure in France, may recover to consider a possible application in France.

Around eleven o'clock this morning the current voluntary leavers dried up. The employees of the migration service despair not: migrants waiting in the jungle until it is less busy, or want first from people who have already gone to hear how the shelters look like.

Employees are currently back to flyers, to persuade jungle dwellers to board the bus. There is certainly a group of Afghans who absolutely do not want to go to such a center. The men would have created a bonfire with their papers.

Meanwhile have registered 500 children, who are brought to the container camp near the jungle. They claim to have relatives in Britain, some employees of the Home Office to figure out at this time. Minors without parents with family across the street, get according to Minister Bernard Cazeneuve of Interior asylum in the UK.

Aid workers remain skeptical. If there are now around 3,000 people left voluntarily, there remain another 2,000 migrants over that at all costs want to the UK. The question is how they prepare for decommissioning. There activists of the militant group 'No Borders' were in the jungle, who go to migrants goaded the confrontation with the police.\n  \n  \n   advertisement

It is also the question of how people react to the actual dismantling of the camp, which starts today. Hand degrade this afternoon from the first huts.