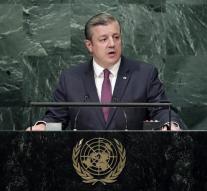 - According to the first exit polls seems the ruling party Georgian Dream (GD) of Prime Minister Giorgi Kvirikasjvili to win the parliamentary elections in Georgia. According to the same polls, the United National Movement (UNM) of ex-president Mikhail Saakashvili's second largest party. Sandra Roelofs, the Dutch wife of Saakashvili, was a candidate for the UNM. Both parties push for rapprochement with the European Union and NATO.

The pro-Russian Alliance of Patriots, according to the expected reach the electoral threshold of 5 percent.

Because of the complicated electoral system in Georgia, where about two weeks follow district elections, the final outcome is probably only become clear around late October. The GD demanded after the announcement of the exit polls, the victory already: ' According to our information, we have 58-59 percent of the vote, '' said Deputy Prime Minister Kaladze.

The left liberal GD was founded in 2011 by the wealthy businessman Bidzina Ivanisjvili. Two years later the party won the election. In three years, the government exchanged, however, three times Prime Minister.

UNM-leader Saakashvili, who unleashed the Rose Revolution in 2003, is wanted since 2014 on suspicion of abuse of power. The former president lost his Georgian citizenship and regional governor in Ukraine since last year. During his presidency, Georgia became embroiled in a war with Russia in 2008, in which the country lost control over the regions of South Ossetia and Abkhazia in Moscow.