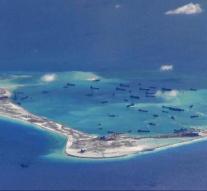 peking - China and Russia hold in September a joint military exercise in the South China Sea. The Chinese Defense Ministry, which announced this Thursday, speaks of 'routine exercises.

The statement comes more than two weeks after the pronounced by the Court of Arbitration in The Hague over the sea. The court rejected the Chinese claims to much of the South China Sea. The country claims nearly the entire sea, even reefs that are close to the Philippine coast. China lays the verdict aside.