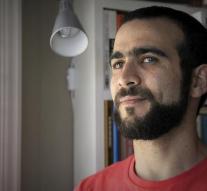 ottawa - The Canadian government has formally apologized Friday to a man who held ten years in Guantanamo Bay. The authorities also made a financial settlement with Omar Khadr, who was arrested in Afghanistan at the age of fifteen after a firefight.

The Canadian Supreme Court ruled in 2010 that Canada had violated Khadr's rights. Canadian intelligence staff members interrogated him in the US military prison in Cuba and shared the results of those talks with the Americans.

The authorities did not know what Khadr compensation could pay for, but according to well-established sources, it amounts to 10.5 million Canadian dollars (7.3 million euros). The conservative opposition recently reacted furiously to the 'huge reward for a convicted terrorist. '