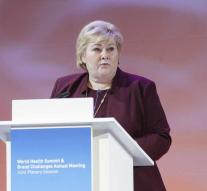 oslo - Norway apologized for the way in which Norwegian women had a relationship with German soldiers during the Second World War. Premier Erna Solberg apologized on behalf of the government on Wednesday, reports the BBC.

So-called 'slave girls' had a hard time after the liberation of Norway. They had fewer rights, were imprisoned or banned to Germany with their families. 'Our conclusion is that the Norwegian authorities have violated the rule principle that no citizen can be punished without trial or without the right to be sentenced,' Solberg said.

It is estimated that 50,000 Norwegian women have had a relationship with a German soldier. Around 10,000 to 12,000 children have emerged. Heinrich Himmler, leader of the SS, urged German soldiers to have children with the usually blonde Norwegian women. In this way the Aryan race had to be preserved.