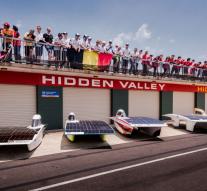 - The first day of the World Solar Challenge in Australia went well , certainly for the Delft Nuon Solar Team . The solar car Nuna eight of the team started in fourteenth , behind the Solar Team Twente. But after a day of driving , the Delft team is now third in the standings and needs only the teams from Michigan and great competitor Tokai letting go .

Shortly before the finish Nuna8 retrieves the striking solar car Red One of Twente , which now stands fourth . " Looking at the performance on the first day Nuon has a good chance to be first in the standings ", said a spokesperson for the team .

Delft students dragged the world title five times in the hold. The Nuna 8 is the only Dutch team with a female driver . Besides Twente , TU Eindhoven participated in the Solar Challenge , but in a different class. PSV ride in the cruiser class , for solar cars for four.