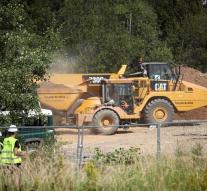 walbrzych - The quest for a gold train of the Nazis had expected proceeds less prosperous than the amateur historians question.,, The results have so far been somewhat disappointing, we must admit, '' said spokesman Christel Focken.,, But eventually we want to unravel the myth. Is there something in the ground or not. '' Only a third of the excavation is finished, so the researchers have hope.

The team is looking since Tuesday for the train, which would be loaded with Jewish treasures and lost 'amber room' from a Russian palace. Two amateur historians think that the train is in a tunnel system that the Germans at the end of World War II were digging in the Polish town of Walbrzych. They even have already filed a claim for 10 percent of the loot.

Experts in the field surveyed noted last year that probably 9 meter deep well is a tunnel, but the presence of a train during their soil investigation revealed nothing.