Home / World / Ex- Prime Minister of Israel indicted in the US 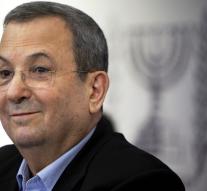 - The former Israeli prime minister Ehud Barak is in the United States charged with an attack on an international aid convoy to the Gaza Strip in 2010, killing nine people dead. Barak was defense minister.

International human rights lawyers have filed the case. They do this on behalf of the relatives of a nineteen- year-old American man of Turkish origin, who was one of the nine victims. According to lawyers he has been hit by the attack by five bullets. One bullet went through his head.

The Israeli army attacked late May 2010 Turkish ships of the Freedom Flotilla ( Freedom Flotilla ) to. The fleet, carrying seven hundred activists wanted to deliver 10 000 tonnes of aid into Gaza. Israeli troops boarded the ship by force. The attack led to international outrage.

The group of lawyers has already - unsuccessfully - tried to have the case examined by the International Criminal Court in The Hague.