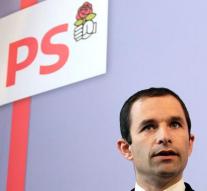 paris - The left-radical Benoît Hamon, who pushed the French Socialists last year as a presidential candidate, joins the Socialist Party (PS) after thirty years. Hamon said in a speech in Paris on Saturday afternoon that an audience of, according to French media, estimated 11,000 people left the PS, but did not deviate from the socialist ideal.

Hamon expressed disappointment in the presidential elections on April 23 with only 6.35 percent of the votes, the lowest score for the party in nearly fifty years. According to former Minister of Education Hamon, left France has to turn a page and continue the political struggle in a new move. He calls his movement the Movement of July 1st.

The established French parties are in control of the rise of La République and Marche (LREM) movement of President Emmanuel Macron. Macron founded the Liberal and Social Movement last year, and soon gathered 230,000 volunteers or activists. That was 5.5 times more than when the governing PS had members. The Prime Minister of the then government, Manuel Valls, recently left the PS to step behind LREM.