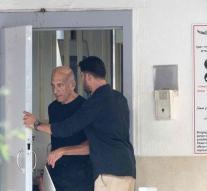 Olmert was sentenced to 27 months celeback for accepting bribes from project developers when he was Mayor of Jerusalem before becoming prime minister. The lawsuit meant the end of his political career.

The Israeli authorities decided Thursday that he could be released soon after sitting out of two thirds of his sentence. Olmert has been stuck for 16 months.